Transit Oriented Development and those who need it most 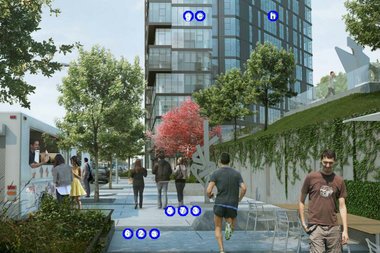 Logan Square is a Chicago community at a crossroads — literally and figuratively. Its location, character, diversity, and proximity to public transit and major arterial streets have made it a desirable location for young apartment hunters and working families alike. Now, the community faces the question that confronts many urban neighborhoods sooner or later: How can they maintain their character and affordability, while accommodating new development ?

The Chicago Tribune ran an article on May 2 about a new apartment development in Logan Square. The “Logan Square Towers” development will consist of one eleven-story and one twelve-story tower, with a total of 293 rental units, with market-rate rents ranging from $1,400 per month for studio apartments to $3,900 for three-bedroom units. Twenty-two of the units will be reserved as “affordable,” with rents from $780 to around $900 per month.

The project is the latest example of the trend toward Transit Oriented Development (TOD). TOD lets developers fit more units into an urban project that’s close to public transportation, because they can get zoning variances to cut down on the amount of parking required for the project. The idea is that more rental housing near transit means fewer cars and less congestion. And more housing stock means lower rents. Everybody wins.

But when apartments in a TOD project are not primarily affordable, the development can have unintended negative consequences on its community: more high-end renters are drawn to the community. Rents can rise, pushing those who most need affordable housing, and access to public transit, out of the neighborhood.

Full Circle knows something about Logan Square. We recently preserved a Single Room Occupancy (SRO) apartment building at 2611 N. Sawyer. The 34 apartments were preserved thanks in part to a new Chicago ordinance, passed last year, that requires any seller of an SRO to provide a six-month window for developers wishing to preserve the units as affordable. Because we’re a mission-driven developer and acquirer of affordable housing, and because supportive services for our residents are a crucial component of our mission, we understood the importance of preserving those apartments.

We also know Logan Square because several of our employees call it home. They care about the community and want to see its character and diversity maintained. They understand that well-built, well-managed affordable housing can be a community asset. And they know how access to public transit improves the quality of life.

They want to see Logan Square’s affordability maintained, too. As much as we would like them to achieve their goals, financial and otherwise, we know that at least some of our employees can’t at present afford the rents that new developments like the Logan Square Towers will be charging.

Some proponents of the Logan Square Towers have claimed that new development actually expands the community’s affordable housing stock: newer homes and apartments typically cost more than older ones, the thinking goes, so existing housing is more likely to stay affordable. After all, it’s claimed, if no new housing is built, then gentrification takes root in the existing homes, not the new ones.

This is true — if the new development emphasizes affordability. However, if predominantly high-end housing is developed, then the higher development and per-square-foot rental costs will drive up the price of surrounding housing. The beneficiaries of nearby public transit, in that case, could be people who need it least. And many of those who gave the community its character will be forced to leave.

Perhaps this is part of an inevitable boom-and-bust development cycle. We prefer not to think so. Full Circle benefited from the city’s determination to preserve SROs, a rapidly vanishing type of affordable housing. We know the city wants to encourage the preservation and development of affordable housing. And we believe that ordinances, financing mechanisms, zoning variances, and other measures have helped make that happen for many communities.